The Negrelli Viaduct – Opportunity for a Creative City – is a long-term project by CCEA MOBA which focuses on experimentation between architecture, art and public interest. The project holds a series of activities and small projects, leading to the improvement of the quality of public space in the surrounding of the Karlin viaduct, such as the latest project Summer Under the Viaduct 2016.

The project is led by the architects of CCEA MOBA –the initiators of the project – since 2013, at the time when the investor SŽDC introduced its plan to reconstruct the bridge. The prepared reconstruction is primarily a technical matter, which focuses on the railway tracks and initially, did not count with the possibility of the revitalisation or the use of the spaces around the structure. Our aim was to highlight the potential of the Negrelli viaduct and verify the possibilities of how to include it in the city urban life. The Karlin viaduct is one of the most important technical constructions in the Czech Republic and is the second oldest bridge in Prague. Till 1920, it was also the longest stone bridge in Europe.

The negotiations between the public sectors (the representatives of the Capital city of Prague, Prague 8 city district, SŽDC) have resulted in an intervention directly on site, which tested the impact on the locality and communicated new possibilities of using the arches together with the inhabitants. The public space ´under the bridge´ has become a popular destination not only for the local inhabitants, but also for people that work close-by as well as for tourists. A space was created for relaxation, but also for sports, music, theatre shows and other events. The program was generated directly by Prague inhabitants. CCEA MOBA has in parallel presented its vision which aims in transforming the spaces under the arches of the bridge permanently – in the form of bistros, craft workshops, art galleries and studios – and therefore as a support of minor productions and creativity,, which is the bases of the Karlin DNA.

Thanks to the project Summer Under the Viaduct, an agreement has come into place around the new reuse of the spaces under the viaduct between the public sphere and the local inhabitants. The viaduct transformation has therefore got across the further stages of the preparation, in cooperation with the Capital city of Prague City council and the Institute of Planning and Development (IPR) ؘ with a planned end of the reconstruction for 2017-2020. The Summer Under the Viaduct project proves that an architect, as well as in the role of a citizen which is not indifferent towards the surrounding, is capable of initiating even such a reconstruction of the scale of one kilometer.

The Negrelli viaduct – the opportunity for a creative city – is a quest for a path where a creative activity can contribute to the improvement of the city.

To contribute to the varied life under the arches of the viaduct with your café, restaurant, bistro, studio, workshop, salon or gallery, do not hesitate to contact us.

Park Viadukt
On the outside of the Libeň’s branch of the viaduct we leave the triangle with trees and use its natural character to create a park with full use. By reorganizing transport, we link the park with arcade activities. Karlin thus gains another opportunity to stay in the countryside. In addition, it is a space that once again builds on history and reminds us that the body of the viaduct has been built into the open country. The park also becomes a link between Karlin and Vítkov, leading along the Trocnovská Street. 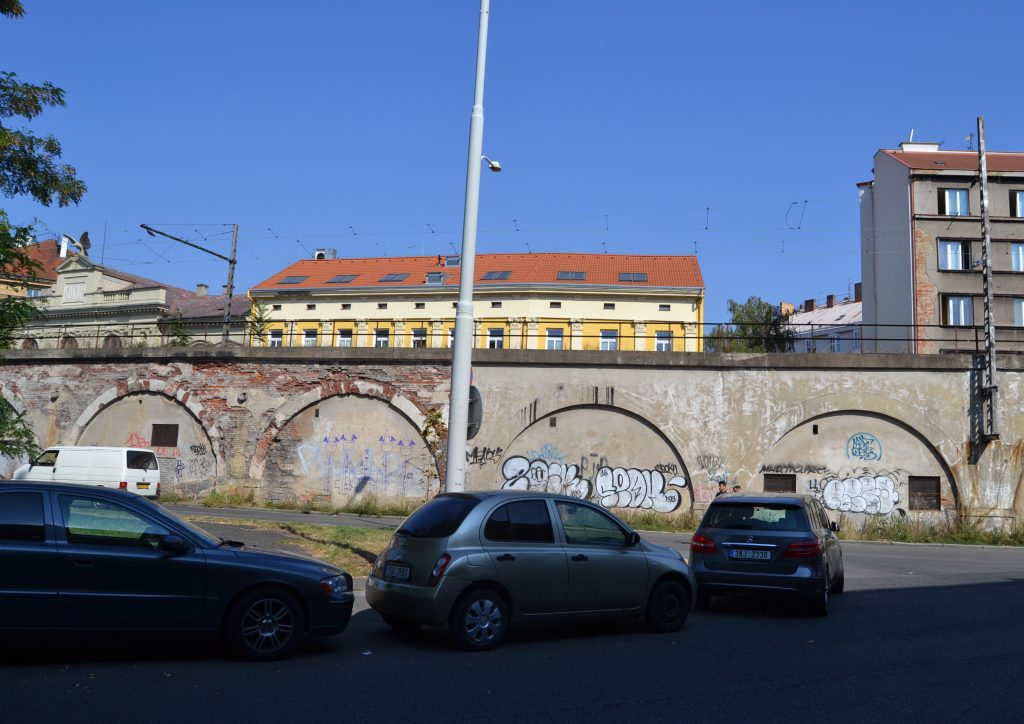 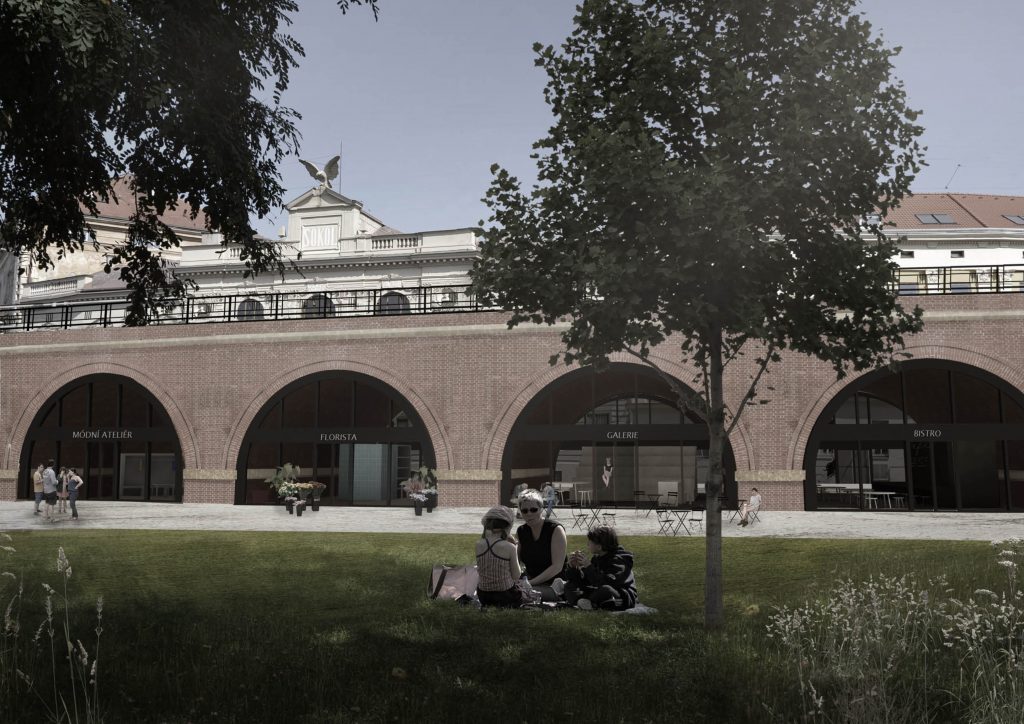 U Kasáren
With a slight increase in the area of the viaduct, we try to define relative to the relatively busy adjacent roads in order to achieve the appropriate degree of peace for the front gardens of cafes, galleries and shops in the arches. The given area offers active traffic taking into account the revitalization of the historically important barracks building, which is taken over by the Ministry of Justice. 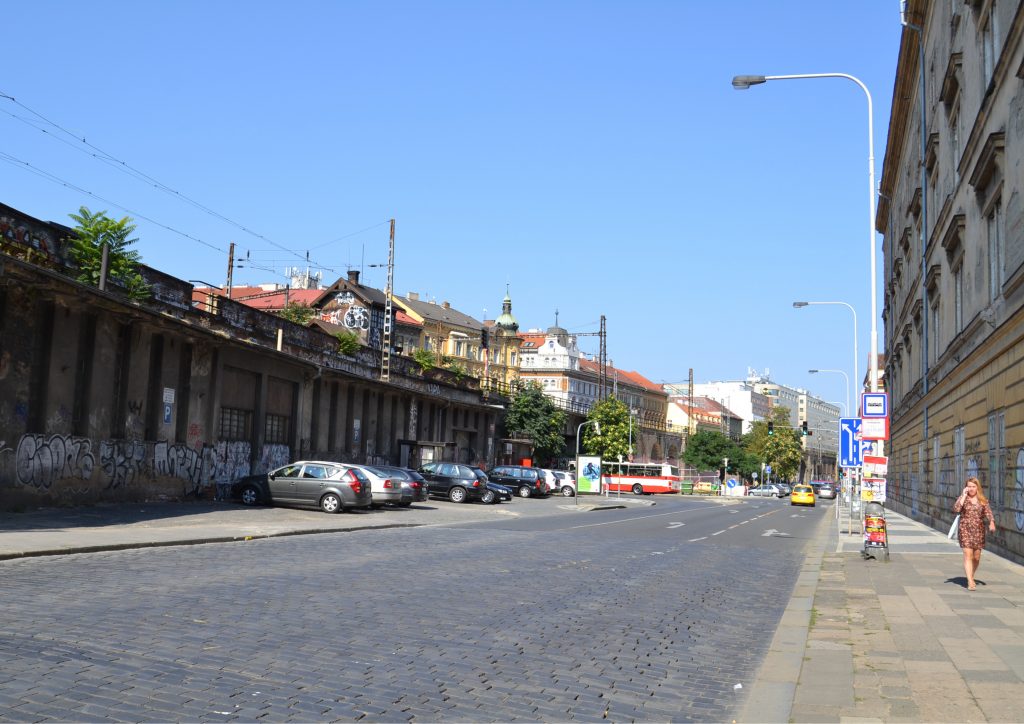 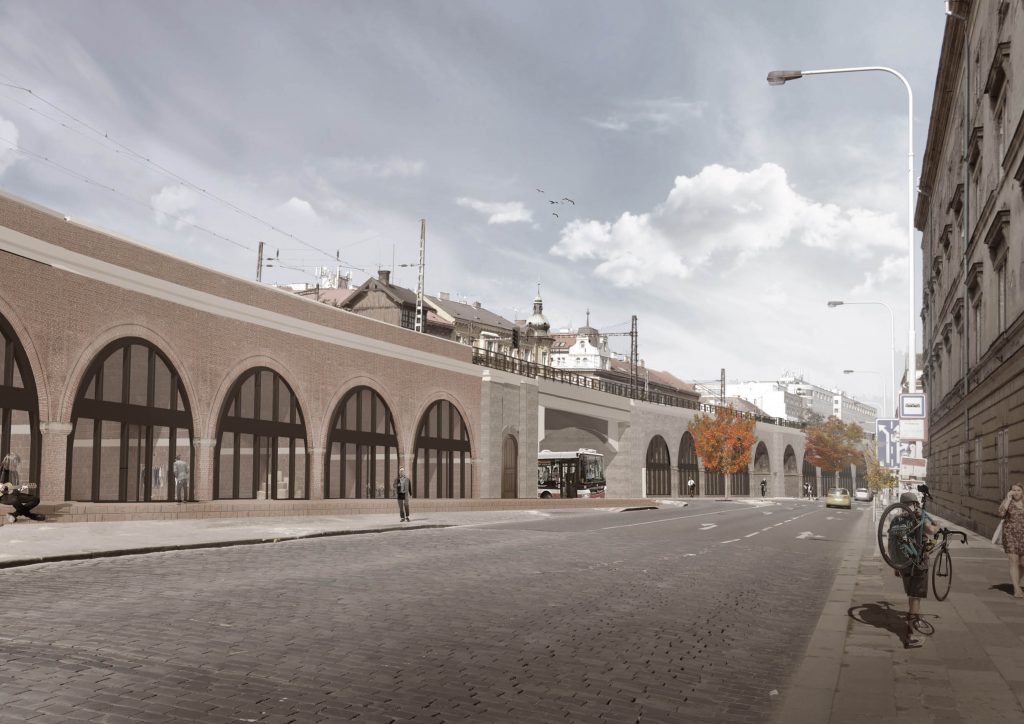 Theater Square
The space that is created by the branching of the viaduct is perceived as very pronounced. In the future, it should be considered as a public space serving for performances or other activities connected to the institution of the nearby Karlín Music Theater. Access would be ensured through free arcs on the side of the theater. This site is processed in three variants using the space between the theater building and the viaduct, using the space between the two legs of the viaduct – at the branch we propose a square that can be roofed for year-round operation: performances, markets, meeting place. 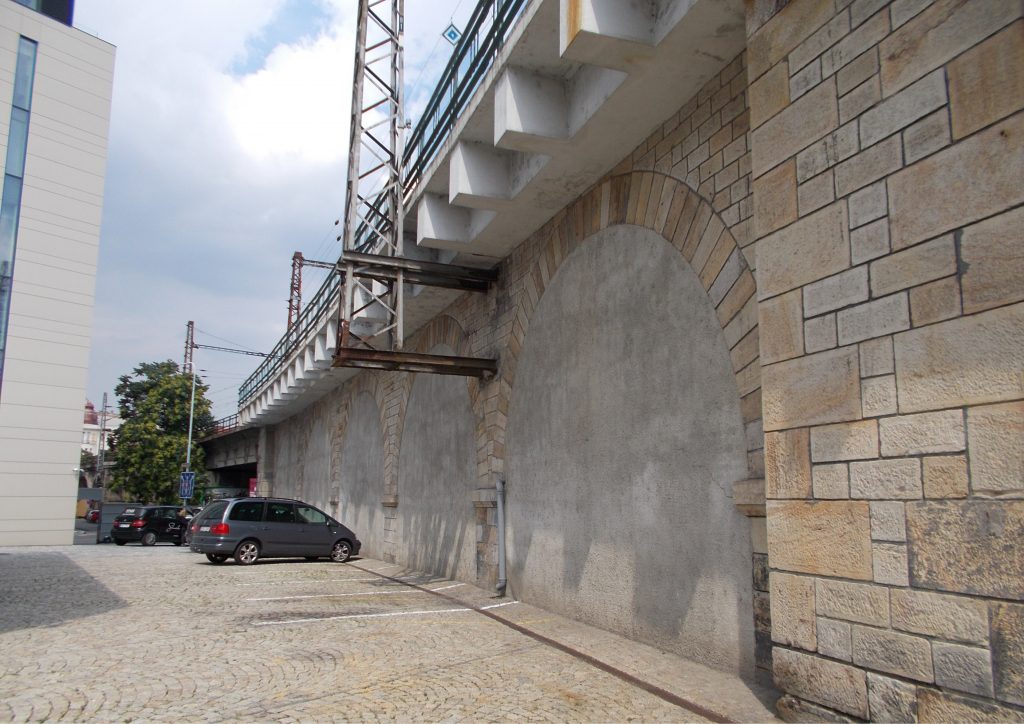 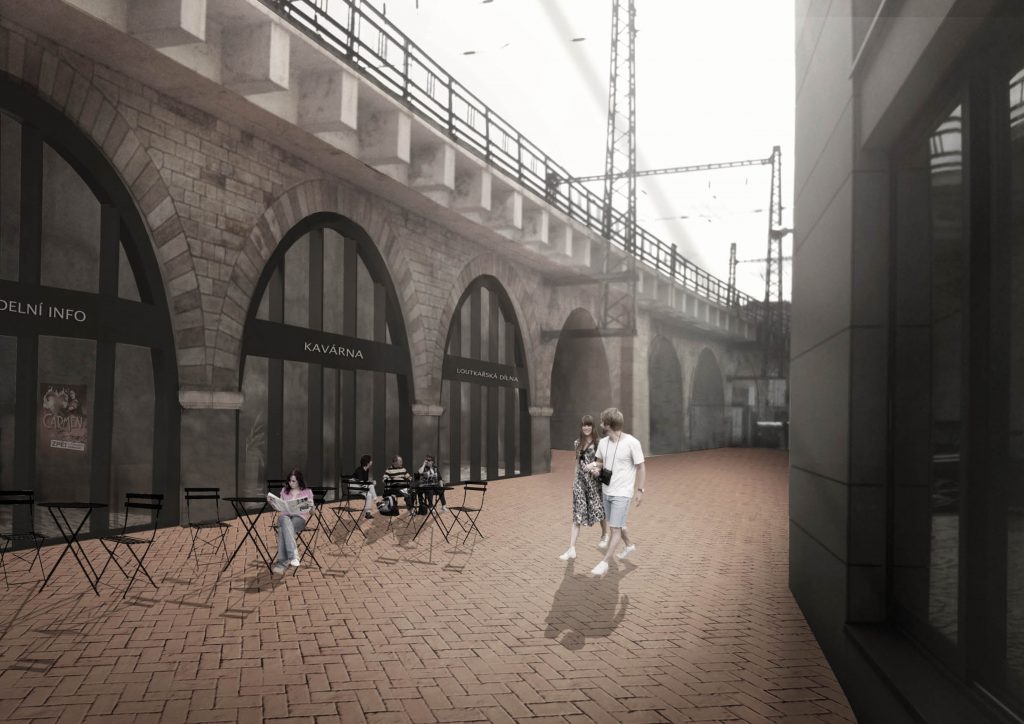 Alois Negrelli Square
We see Negrelli Square as a central element of social life, whose potential has already been demonstrated through a test event. We perceive this space as “soft”, not very formal, following the original landscape in the surroundings of the viaduct. Residential areas are selected by grinding. We try to preserve the existing vegetation to the fullest extent and we add it to the continuous tree-lines between the parking spaces. 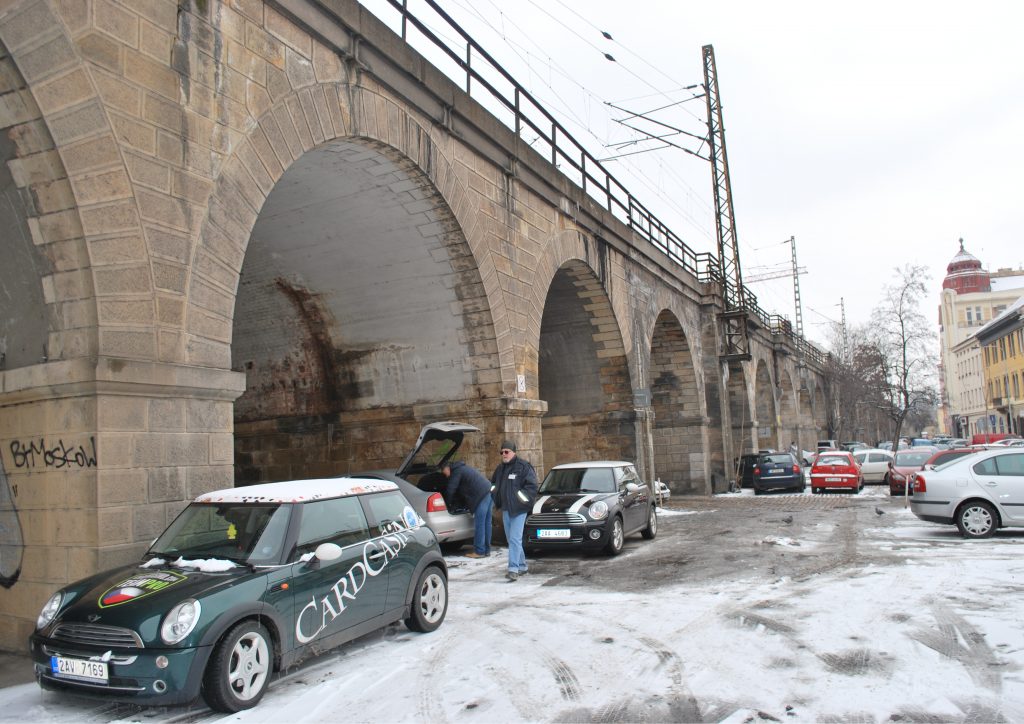 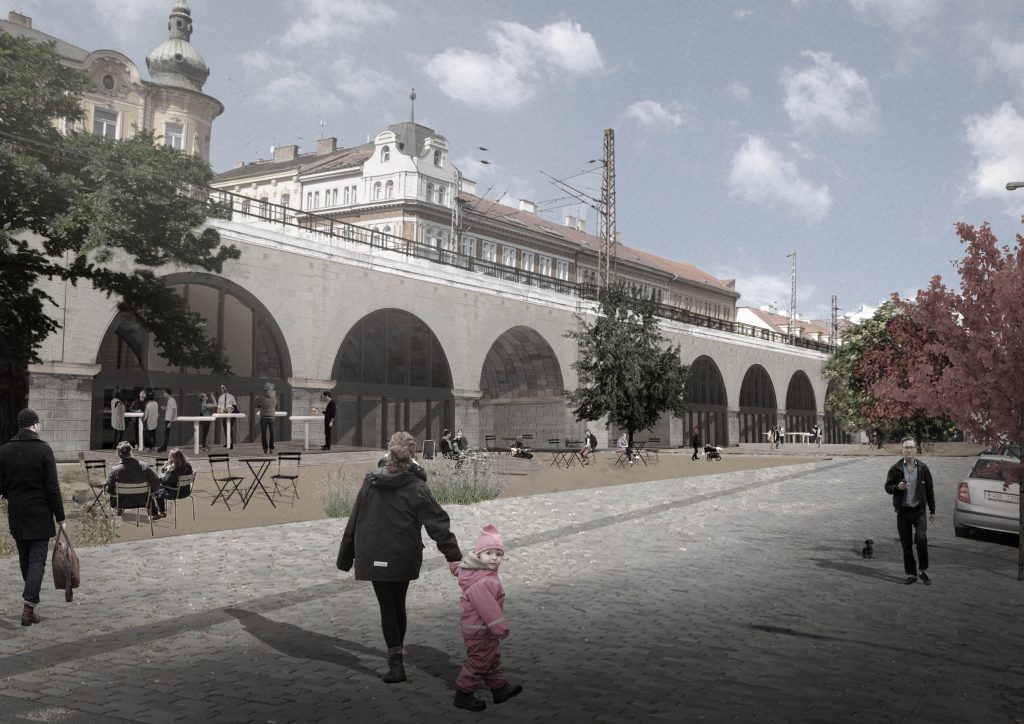 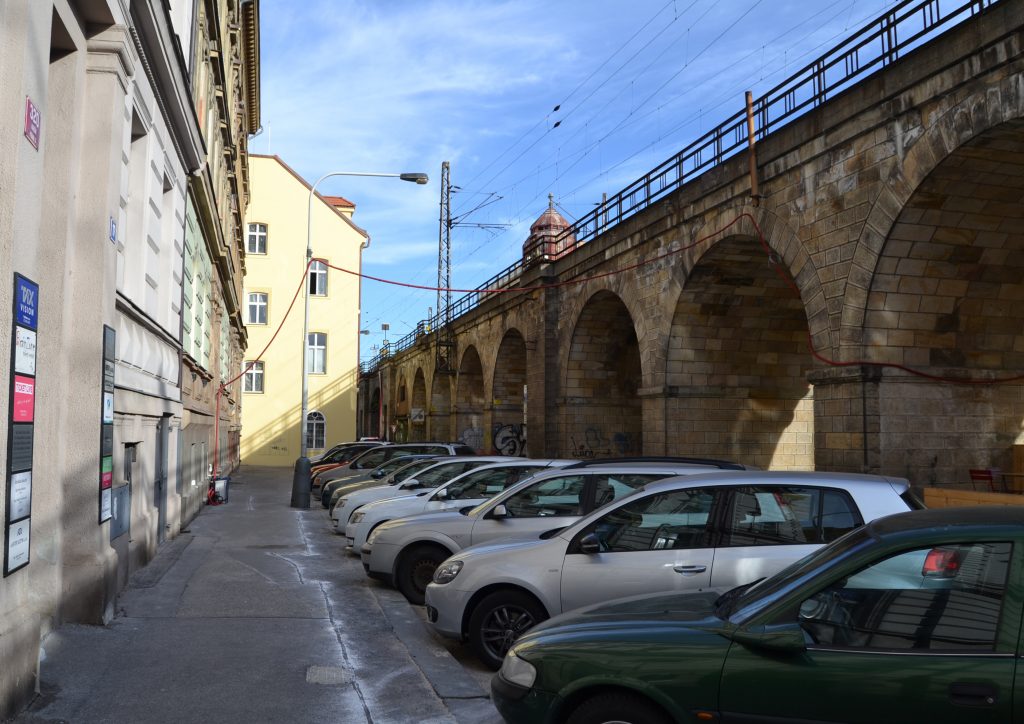 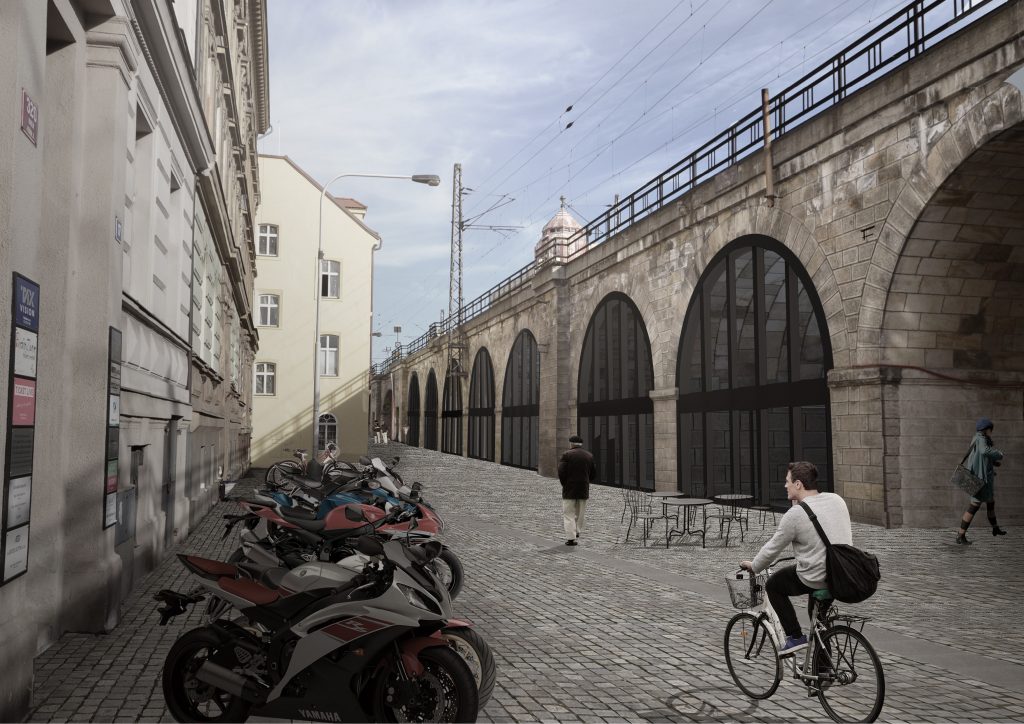 Karlín Gate
The main entrance to Karlín represents the crossing of the viaduct and the Sokolovská Street, the main communication spine of this city district. At this place, we maximize transport, support pedestrians and create conditions for a representative entrance to Karlín. 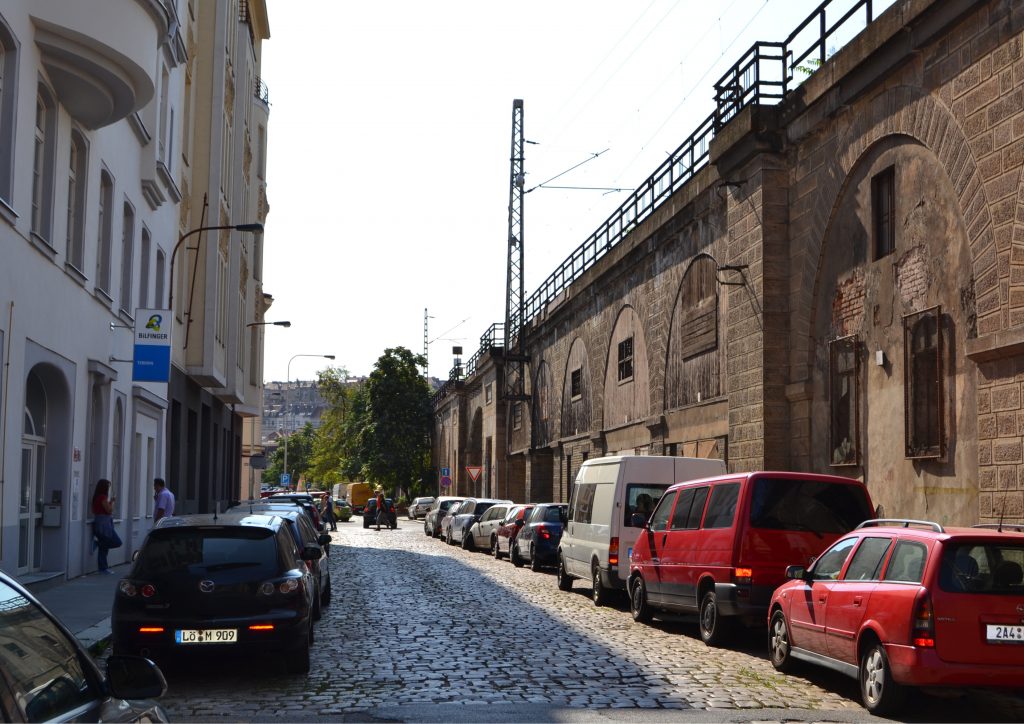 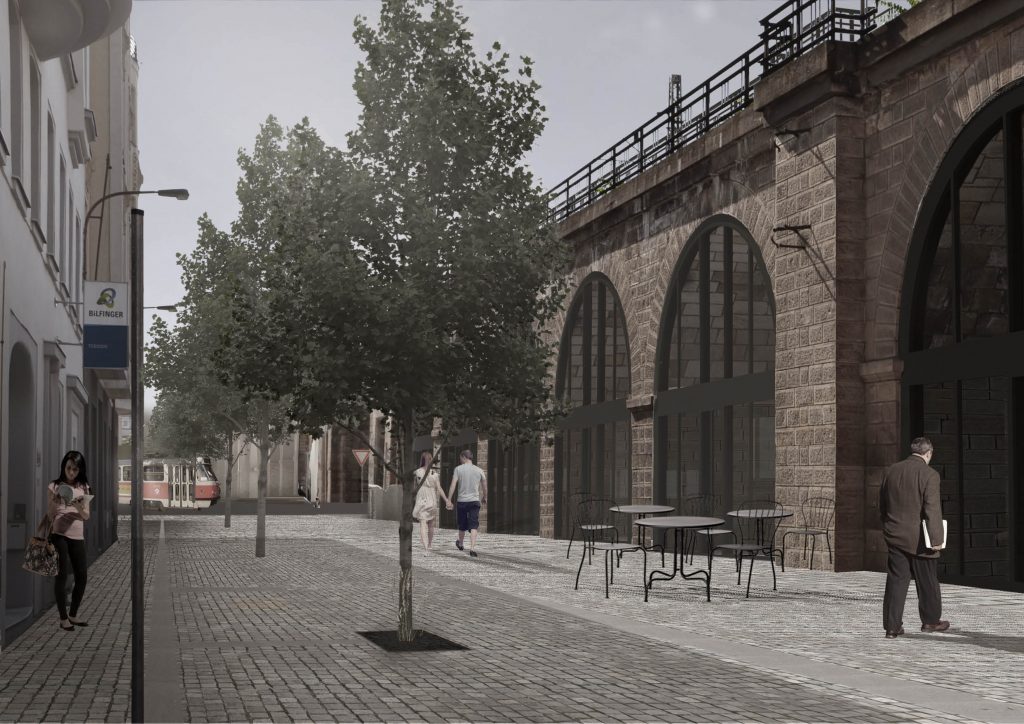 Jerusalem Island
Larger arches, which in the past served to drive trains from Denis Railway Station to Karlín, make it possible to deploy more demanding and more extensive operations. We leave the two arches open so that we can access the planned square within the Vienna Insurance Group of the Czech Republic. 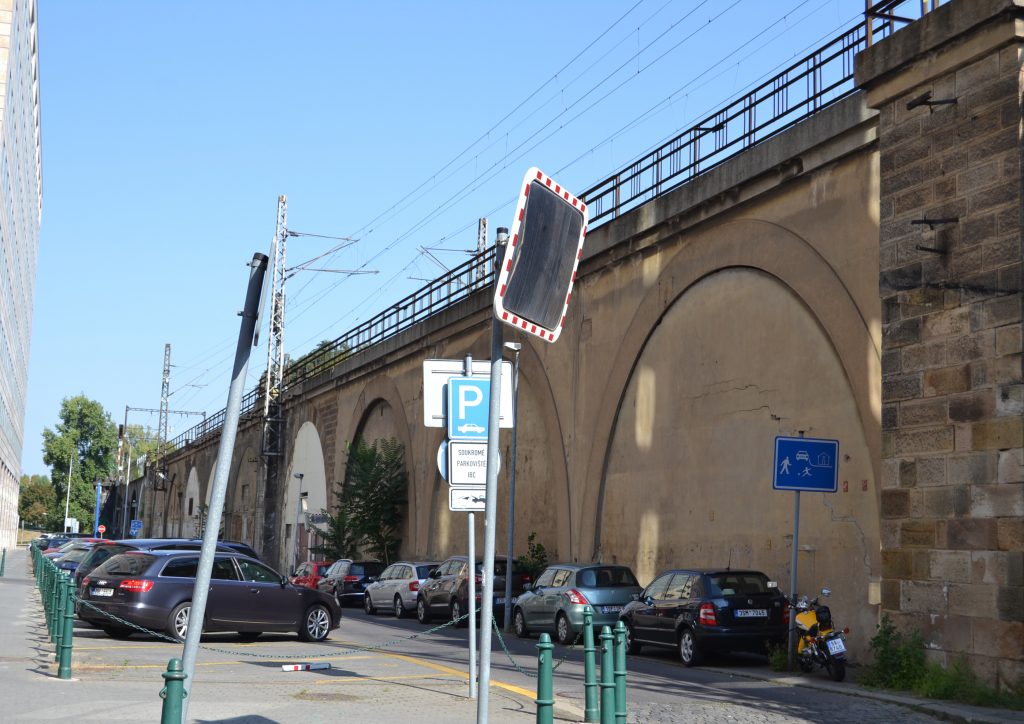 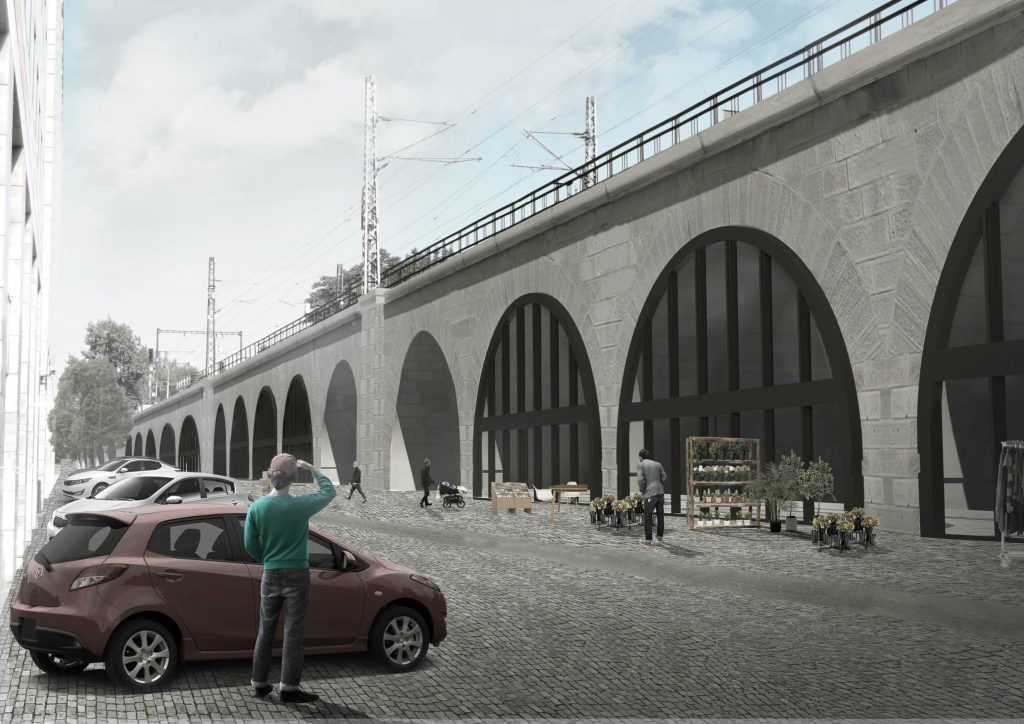 Typology
The architectural study is prepared with the knowledge that it is a cultural monument and that no new structures can be anchored in the bridge body anyway. We support as much transparency as possible, closing individual arches will be solved by fully glazed self-supporting walls. All sandstone walls must be visually inspectable and accessible throughout their use. That is why we have developed a system of self-supporting glass facades that will be anchored to its own base, independent of the existing viaduct structure. Another important element is ensuring the thermal comfort in the room. Because these are very specific areas, we suggest using the minimum recommended temperatures for the living rooms, with no part under the bridge being tempered to above 18.5 ° C. Because of the different temperatures between the interior and the exterior, there is no The sandstone will be destroyed, and in the existing sandstone and the new facade, a resilient belt will be created. This ensures the distribution of the differences between outdoor and indoor temperature over a greater distance in the mass of the material, thereby limiting the negative influence of the temperature difference and avoiding the sandstone cracking. The front facade is designed so that all the wiring and installation are integrated into the middle strip. 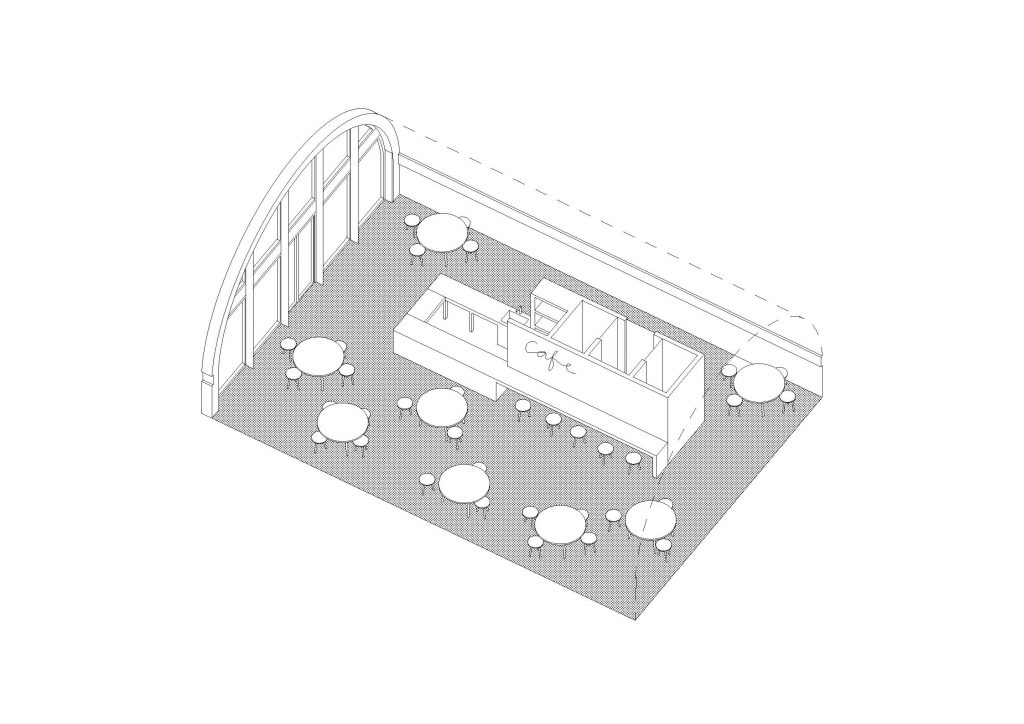 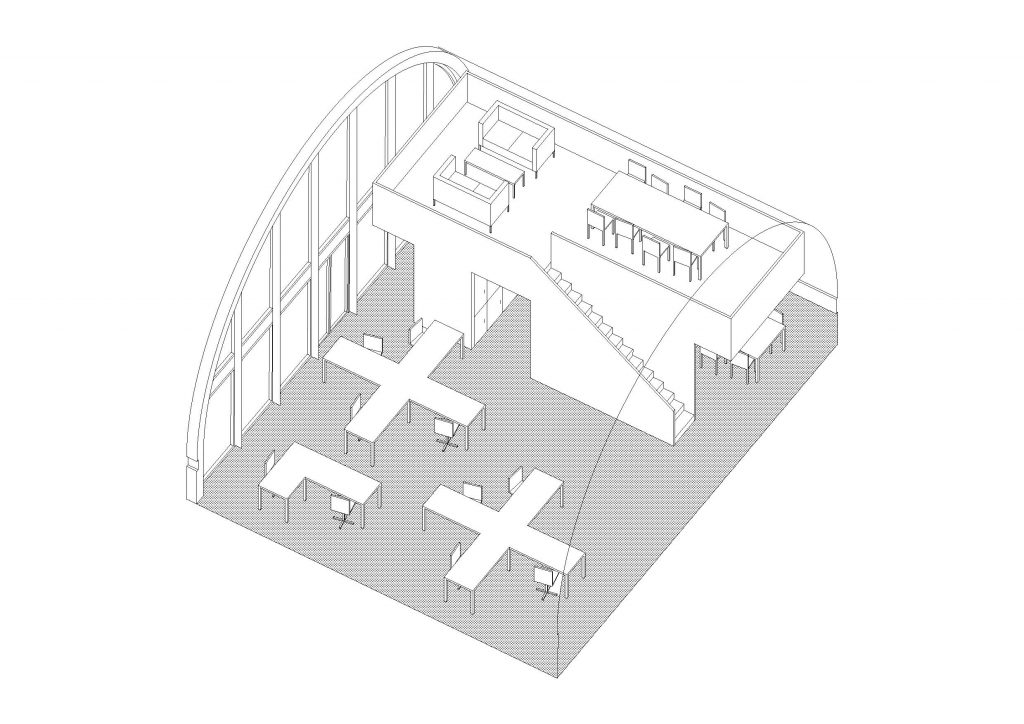 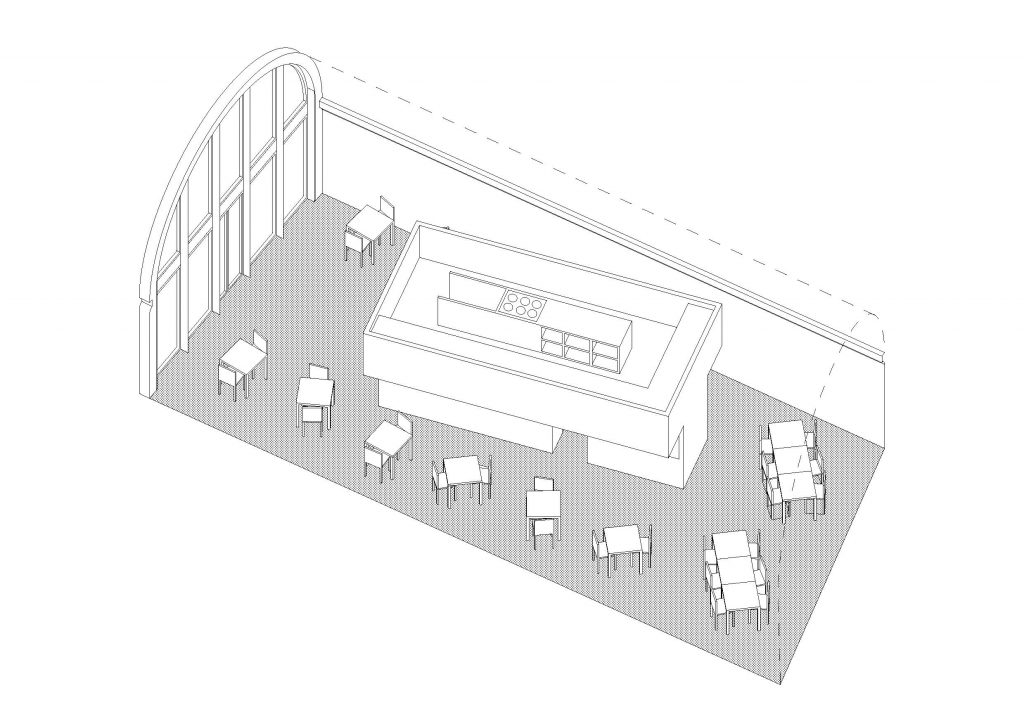